Alternatives to Amazon for buying CDs

You are using an out of date browser. It may not display this or other websites correctly.
You should upgrade or use an alternative browser.
J

It seems like the price of classical CDs is climbing (along with CDs in general to be honest) and in many cases, it's getting hard to obtain them full stop.

E.g. Just tried to get the Sibelius #6 with Karajan below on CD but can't.

I've tried searching on eBay but haven't had much luck there either, with a few exceptions.

Does anyone have any other suggestions for places to go shopping for classical CDs, or at least to download in FLAC?

I guess the streaming services (Qobuz, Spotify etc) don't work in JoshWorld for some reason?

If you sign up to CamelCamelCamel (it's free) you can set a watch on Amazon listings and get notified if one turns up at or below your chosen price.

They do but streaming Spotify is noticeably worse SQ than playing CDs. And I'm not going to subscribe to Qobuz as well as Spotify.

I'll try CamelCamelCamel thanks, although I'm getting the impression that CDs are slowly getting discontinued (which makes sense).

josh said:
They do but streaming Spotify is noticeably worse SQ than playing CDs. And I'm not going to subscribe to Qobuz as well as Spotify.

I'll try CamelCamelCamel thanks, although I'm getting the impression that CDs are slowly getting discontinued (which makes sense).
Click to expand...

Why not cancel Spotify, Qobuz is much better, they also do downloads which can be cheaper than cds.


Discogs is worth a try also for cds.

Because I listen to a lot of other genres and Spotify has a better catalogue. Also I've now got a whole library system organised on there.

If Qobuz do downloads though (in FLAC?) maybe it's worth me getting it for a few months to dl the stuff I like that I can't get on CD.

I came across Presto music which does some stuff not on Amazon, though still a number of things not on there, and they also seem quite expensive.

You can get a 1 month free trial of Qobuz. I would say Qobuz is the best service for classical. Yes download in Flac and cd or HiRes. You can check on the Qobuz store what’s available.

If you trial Qobuz and like it, I think there are some software tools for transferring playlists between services. I've never used them so I don't know how they work.

Ok. I'm hopefully about to take stock of an Aries Mini streamer so will do some comparisons of Spotify again (at the moment I've used it via a Chromecast Audio - it's ok but I find the sound a bit mushy/low-res compared to CD) and then CD and Qobuz.

I do want to move away from CD (I've spent the last few weeks ripping my collection) so will be very happy if streaming will equal the sound quality of my CDs and if it makes Spotify closer than it currently is (or if not, I can try downloading files from Qobuz).

I do love using Spotify as a discovery service - I listen to/use it a lot - just that for critical listening it's just not that good at the moment.

Music Magpie sell cds, might be worth a look, new and used.

When looking at recordings of popular composers and popular performers on the major labels, chances are the same recordings have been released and re-released many times as the record company tries to continue cashing in on works already in their archives.  There may also be used 'record club' versions of the albums which are less valuable, but which have the same sound quality as the original release.  Thus, keep an eye out for the same recordings on other albums.

In the last decade or so, the major labels have been producing 'bargain' box sets of these popular works.  In the case of those Karajan Sibelius recordings, this certainly seems to be the case.  Klassik has not looked carefully (and, frankly, Klassik is not much into the music of Sibelius and is even less into the performances of Karajan xD ), but at the very least, DG released in 2021 a complete set of Karajan recordings of Sibelius music on the DG label.  It consists of 5 CDs and a Blu-Ray Pure Audio Disc.  The price direct from DG is 26 Euro.  That might be a bit much if you just want one symphony, but the price isn't bad if you want all of the Sibelius that Karajan recorded.

Klassik knows not about UK classical music vendors other than Presto Classical.  To Klassik in the US, Presto's prices seem reasonable.  Here recently in the US, there has been consolidation with popular classical music online stores.  Klassik liked the HBDirect store out of Vermont, but it seems they were bought by ArkivMusic operation which itself is owned by Naxos Klassik does believe.  The end result is higher prices, higher prices for shipping, and fewer promotions.  :S   At least something still exists though, right?  :/

Klassik has purchased some of the aforementioned bargain box sets.  That said, Klassik generally listens to more obscure music than popular works and so one cannot be picky about those.  Often, those works are only recorded once or twice.  Take what's available and like it or don't.  Oh well, there are still good discoveries to be had and Klassik likes browsing the local new/used media stores to see what interesting things they have.  Here recently, they have a lot of closeout Hyperion and Brilliant Classics CDs and there are some good bargains to be had on unopened classical CDs.  Klassik knows not if such stores exist in the UK, but if so, they might be worth a look.  The new/used media store also has many used CDs.

Back to the topic of box sets and re-releases, there might be a practical benefit to buying a newer re-released/box set version of a work rather than an original CD from the 1980s or early 1990s.  Many of those older classical CDs had pre-emphasis and that can create issues with outboard DACs and when ripping the CDs.  The end result is often overly-bright sounding music.  Modern re-releases will probably eliminate the pre-emphasis so that the CDs can be played back and ripped with more expected results.

Presto classical, EuropaDisc are both good.
Is this the album you want (plus others...) 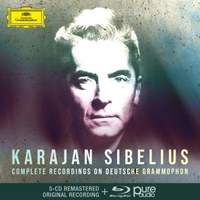 Need some help getting into classical

DAC to replace Tone Board - Anyone using a high end DAC with RPi 4?

M
Help me choose my new direction for Linn system

D
Found a solution to Raspberry Pi and foobar2000 integration