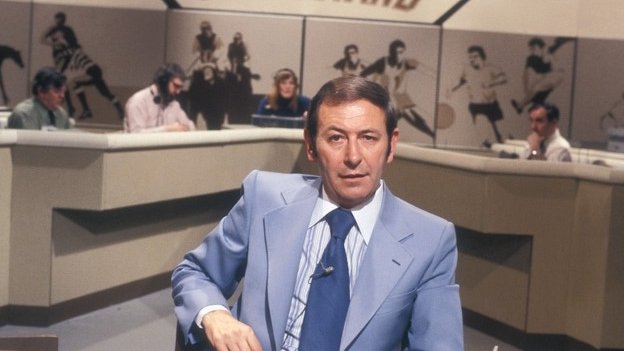 Coleman presented some of the BBC's leading sporting programmes, including Grandstand and Sportsnight, and was the host of Question of Sport for 18 years.

Later that year he became the first broadcaster to receive the Olympic Order award, in recognition of his contribution to the Olympic movement.

I did not think he was that old, but a sad loss of a great sport commentator. :RIP:

Tip top commentator, a few gaffs along the way

"That's the fastest time ever run - but it's not as fast as the world record."

"Don't tell those coming in the final result of that fantastic match, but let's just have another look at Italy's winning goal."

"He just can't believe what's not happening to him."

"In a moment we hope to see the pole vault over the satellite."

"He is accelerating all the time. The last lap was run in 64 seconds and the one before that in 62."

"For those of you watching who do not have television sets, live commentary is on Radio 2."

"The late start is due to the time."

"It's gold or nothing...and it's nothing. He comes away with the silver medal."

"He's even smaller in real life than he is on the track."

"The front wheel crosses the finish line, closely followed by the back wheel."

"This could be a repeat of what will happen in the European games next week."

"That's the fastest time ever run, but it's not as fast as the world record."

"If that had gone in, it would have been a goal."

"This evening is a very different evening from the morning we had this morning."

"He's seven seconds ahead and that's a good question."

"I think there is no doubt, she'll probably qualify for the final."

RIP David, one of my favourite footy commentators growing up.