Good to see that Her Majesty Princess Lardy Da won the BBC sports personality of the year.

How somebody with her background was ever able to learn and excel in horse riding is a real miracle.

I know, it must have been such a struggle for her. What an example to us all, to see such a battle against the odds.

Unlike that shirker who led the Tour De France from beginning to end, anyone can ride a bloody bike round france for a bit for feks sake. Or that Welsh bloke who only had to box 12 rounds against one of the worlds best fighters, HA! i don't know a single welshman not able to have a fight on their own, let alone with a real opponent.

I thought her speech was amazing:lmao:

I thought her speech was amazing:lmao:
Click to expand... 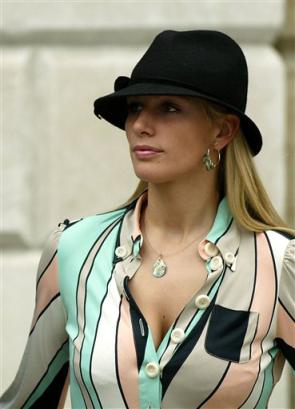 I thought her speech was amazing:lmao:
Click to expand...

:shock:gets to adjust her riding tackle on a regular basis

Who is she ?The main question is simply this; does her body give me the horn ?

After all, that is the point of sportswomen, innit ?

Off to the tower for you for that comment clothie :lmao:

Calzaghe should have won, end of.

If picking someone else then it should have been based purely on 'personality' and 'capturing the public's attention' and thus been Darren Clarke or Monty Panesar.

Zara 'easy life' Phillips should NOT have won.

True she was no looker but darn flexible.

However moving away from puerile 'lads chat' surely she or Nicole Cook should have won on the basis that there world champions in sports which are practised by the majority of 'sporting nations' around the globe. some of which put considerable sums of money into them while I suspect they get diddly squat support in comparison.

However, stop complaining the great British public have spoken (well at least all the staff involved in the Royal households who were probably under strict orders to vote) and Zara Philips won; and she performed the astonishing feat of making David Beckham seem eloquent.

Was she? Post a pic of her.I haven't seen her but , Oh my, these gymnastscan be amazing.

Do you remember Suzanne Dando from a decade or more ago ?

She won the female Superstars sports competition on TV and went on to being a TV presenter.

I remember one of the times I got the most horn ever, was watching her on some programme in the afternoon when she was wearing skimpy shorts and she gracefully crouched into a canoe -- oooh :shock:those thighs !
Click to expand...

Sloanes give me the horn

(until they open their mouths

My, the royal girlie is rather chesty, is she not?

A former squeeze of mine regularly used to beat her at local 3 day events, I suspect the horse she is currently riding *may* have something to do with it

Though I do remember not so long ago when she was dating that Jockey Richard Johnson?, her 2am in the morning 'grimsby fishermans wife' rant at him in the middle of Stow on the Wold most un royal like

seems she inheirited a lot of her mothers traits!

I won't say she was particularly a looker too, however Tindell seems a perfect match!

She certainly was at the front of the queue, go on you know you would!

Having seen her up close many a time Phil, and honesty I'll pass. though I'm sure a few would be only too keen!!!!

Got to get this off my chest