I finally got something. But imported it from Japan-as they only sold these there.

The Story of buying a Nissan Elgrand E51 van from Japan.

9th July. 2012. The day I started my saga of acquiring a Nissan Elgrand from Japan, via Algy's Auto's Personal import scheme.

It'd been 18 months since I sold my Lexus LS400 Ser 4, and I'd been skimming about, month by month!!..trying to decide which car to buy next.

Or...a Honda NSX? A la Sam! Go out in style? (Assuming back holds out getting in so low!)

C6 looks nice, but research reveals dodgy quality. But, after a Lexus, not much comes close in quality if not style.

After a 4 litre V8, one misses the supreme confidence the capability imbues.

As my partner, Carole, runs a Micra, and we live on good communication hub (Buses/train) I don't really 'need' a car.

In the end, between us, we decided to get something we could occasionally Camp in! But also use as a 'trip' car.

Not a full-blown Camper conversion van. Campsites have such good facilities these days you don't need to lug the whole caboodle about all year.

But something we could drop a platform rig in, to sleep on and store under.

I'd spotted a van, by happenstance, that caught my eye for it's looks.

A E51 Nissan Elgrand. Only available in Japan.

I'd run a Nissan S-Cargo for 7 years as a work/self-advertising van, and loved the thing. Fun in spades!

The Elgrand looked great the more I researched it.

And they've been using it for over 10 years -even in the E52 Elgrand now!- so it must be good.

After the Lexus gem of an engine, that was reassuring. Yet not TOO gas-guzzling. Comfortable ride.

Huge inside, yet the 'footprint' was no larger than the LS400.

More research on importers and I started the process thru' Algy's.

Didn't hurt that they shipped to Portbury, a mile from my door! Hallen Motors did the fettling nearby.

Paid my fee. started getting daily pictures, plus spec-sheet on cars coming up for auction in Japan.

The auctions seem to be huge, and often!

After a couple of misses, being outbid on my maximum price, I got a 52000 mile 'Highway Star' version.

That was 27th July. There were two choices that day. But the reps in Japan rejected one on closer inspection.

Good to have some reassurance that you aren't getting a dud!

Then came the 'learning patience' bit!!

The car is later taken to local Port (Kobe) -though it took a month, leaving on August 31st! - and shipped across the globe.

Having found the name of the ship, Morning Crown, I could track it's movement, which was -slow!- fun. Especially when it 'disappeared' in the Indian Ocean, presumably so the Pirates there couldn't track it either!

Through Shanghai, Bangkok, past Singapore to Suez. Then (three) stops in Turkey, before transhipping in Zeebrugge (would the car get lost on the quayside.....?) before its final arrival in Portbury, on October 21st.

I had planned to go and watch the ship sail up the Severn Estuary (from the Lido Cafe in Portishead!) but it slipped in at midnight!

In Sailing ship days, 1800s, owners would go to a local viewpoint to look out for their long-gone ships coming home.

I fancied copying that history!

The bearings? Not a problem. The nuts to FIT the bearing (surely integral part?)...had to be shipped from Japan!

So another 3+ weeks of wishing and waiting, until the DHL package arrived.

As I write this, 30th November, the nuts have finally arrived, been fitted.

The MOT has been done.

The papers have gone to DVLA, which can be 2,3 or ? weeks, until I get issued a registration number!

So, if Im 'lucky' I may finally have the Elgrand the week before Christmas!

Five months from start to finish. It CAN take less, of course.

One does learn patience, doing an import this way!

Resign yourself to fate!

Its been interesting, for example, seeing just how many THOUSANDS of ships are permanently trekking around the Globe bringing stuff!

Never stopping for too long anywhere! It's not a pleasure cruise!

My neighbours now want to go and visit my van, while it sits just over the hill, waiting!

Soon 'll be able to delete all the dozens of e-mails I wrote to Sveta and co at Algy's to (hopefully!!) keep them amused.

Don't feel TOO sorry for them. They get to live in Cyprus' sunshine! (-:

'Luxury Liner' by Emmylou Harris is playing on iTunes as I type. Song about trucking down the highway...or Hiway, as my van is a 'Hiway Star'!

Thanks to the 'Hiway Stars' at Algy's for all their work , and Hallen too.

Two cool dudes thought the van was 'way cool' the other day when I was there!

Soon on a road near here! Well, assuming it don't snow soon!

Later.....Friday 13th December! Collected car! With great trepidation after not having driven such a size car for last 2 years.

Let alone volume! But was soon getting into the groove. Just had to recall it's a biiiiiit wider!

Nice to be back in an Auto, plus have useable power on tap.

Now glowing in our cul-de-sac car park (it's not made in Fukushima! It's 'Pearl White' pearlised paint!

Now; swot up on the owners' manual, kindly translated by a guy called Gralen in Australia!

Cripes I'm knackered after reading that. Put some pics up!

Edit to add, I'll post 'em if you PM me your email address.

Quite a few of these already in the uk if you had wamted to save yourself the wait. 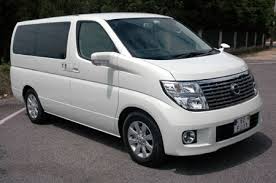 Yes but with a bit of horsepower!

I find it a more LOGICAL alternative to owning a saloon car. MUCH more useable space when needed, but same comfort and capability. And I have no need for 'ultimate cornering' capability. I find modern saloons much too enclosed, somehow.

Can even transport quite large loudspeakers easily! A vital reason??!! (-:

And Sam.....I was very tempted by NSX (my manager in the '00s promised she'd buy me one when she won the lottery.!)

But age has mellowed me?

Still, I could just have stored it away, watching the value rise!

Holden - the end of an Australian icon