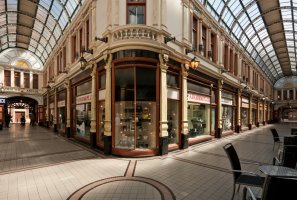 ​
I spent my formative years in Hull, Humberside or East Yorkshire as it is now called.

Kingston upon Hull was the City of Culture in 2017 don’t cha know!

And nestled in Hepworths Arcade, Silver Street (old part of Hull) is the audio emporium of Fanthorpes. They have been in business since 1948 when they were opened by Arthur Fanthorpe and his wife Laura. They are featured here as another one of the Good Guys in audio, as they are great audio dealers. Also, Fanthorpes have a unique feature that is part of their total service.

Now you may be puzzled because I live down South and Fanthorpes are in Hull, so how can I tell you about their service and call them the good guys in audio. That is part of the unique feature I want to highlight.

Before I do that, I should point out that they have an eclectic mixture of audio companies and products for sale. Whilst you may expect PMC speakers and Bryston to go together, Fanthorpes sell Luxman amplifiers and Chord electronics, Devialet and JBL speakers. If you want the full list, go to their web page at: https://www.fanthorpes.co.uk. 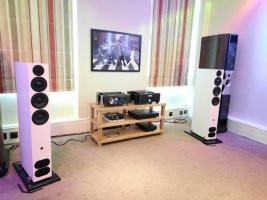 ​
They have a nice demo room and a service department, which should help prevent returns to manufacturers. If you are upgrading, they offer generous trade-in prices for your audio and that means Fanthorpes have a lively pre-owned page with a few bargains, which is what attracted me to them. 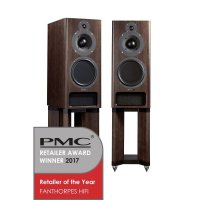 ​
I was on the lookout for some new large speakers and had my eye on a pair of PMC IB2SE speakers. On their pre-owned page was an ex-demo pair of IB2SEs in Amarone. I had heard the larger MB2 SE speakers and was immensely impressed with their sound quality. The RRP of the IB2Ses is £19,000, and there was this pristine set for £12,500. I called them and asked if they would accept my ARC Ref 5 and Ref 110 as part-exchange and they made me a great offer. Ah, but I am down South and you are in Hull, how are we going to solve that issue. Easy. We will bring the speakers down to you and you can hear them and see if they work in your room. Our driver was a salesperson and he knows how to install the audio to best effect and can then leave them with you. But it is a 4-hour drive. Yes, we know. OK, can I also hear that nice amplifier that is at half price as well? Yes, no problem. I have to admit, I am not aware of any other dealer that will do that. Borrow used audio, yes, but drive hundreds of miles to deliver and install it. I am sure Fanthorpes will also do that for any new equipment bought.

A few days later a large van was on the drive and all the audio goodies were duly unloaded. There were a lot of boxes needed to house the PMC, stands and amplifier. After an hour or two’s work and a lot of shuffling, it was installed and operating. I was advised the speakers were probably not fully run in so they would need some hours more before they were fully operational. A few days later, when the sound quality was no longer changing, I began serious listening.

And what a great set-up it proved to be. It sounded superb and operated without any problems and I was in hogs heaven, for a time. A friend who knows the inside of a recording studio came round and was impressed with the speakers and the amp. We swapped in my Vitus amplifier and a Thrax amplifier in for review and they both got the thumbs up. It was great audio. The sheer power, drama and impact with this set-up was superb and it just worked. And yes, it could go LOUD, it is a studio speaker after all. But it was also musical and did not sound like an audio autopsy as some studio speakers do.

But all was not well in George Towers. Jen was not keen on the sheer size of the speakers. The speakers were not that big but they were deep and although standing on very pretty stands, the stands were tall. They did impose in the room. I tried all sorts to persuade Jen that they were not that big, but there was no getting around the sheer size of the speakers and stands. So, no option, in the interest of domestic harmony they could not stay.

It was with complete trepidation that I made the dreaded phone call. Sorry guys, she who must be…says no. No problem sir…..pardon. No problem, it does not always work out. Oh. We can come and collect them next week as we are in the area. Oh, excellent. I was expecting grizzles and complaints and ‘what do expect at the price?’ but no. All part of the service.

And sure enough, back came the large van and they picked the whole lot up and loaded them into the van. They were down here delivering a lucky punter a used bargain. The driver was very friendly and genuine. I have to say it was not what I expected. Great audio delivered and installed from across the country, a great price and service with a smile when it did not work out. I may expect that for new audio at full price, but this was used/demo equipment at a great price. And after things did not work out due to a preference, they collected the audio and no grimaces. Unusually good service.

I have to admit I always looked at their pages, particularly the pre-owned pages, and admired their prices. If I had known about their exceptional service, then I would have bought before.

Just fabulous, George. They're actually just over an hour from here, but I've never visited. Great to hear a story of exceptional customer service.