There's more than Maguire in defence you know, it's not all about him!

Anyway the Spain v Morocco was a tight affair, with Morocco putting in an awesome defensive effort. I hope this is the beginning of the end of Tiki-Taka football. I hate it personally, and it works great when you've got the likes of Xavi, Iniesta, Messi etc. in your team. Without that calibre of player I find it so boring. Spain tonight were pretty toothless, a million passes with very little penetration.
Reactions: Wenge1, Bazzer and Colinjg

Pizza Hut adverts for some of the Spanish players.
Reactions: DIB

From the BBC HYS:

That's the problem with Spain. They do 900 passes a game, and when it comes to penalties, they can't resist the urge to just pass the ball to the keeper.
Reactions: Colinjg and Wenge1

Wow, I thought Portugal v Switzerland would be a close game.
A

garn63 said:
If England can showcase their talent over "pragmatically" deduced calculations (see manager) they should have as good a chance as France, of winning the game.
Best crop of England players in my lifetime but will they be allowed to show it. Who knows ? Looking forward to the game.
Click to expand...

You've hit the nail on the head with your quote "but will they be allowed to show it"
I believe England have the players to beat France, if the selection is right and they are allowed to play.

Here's a nice pic. I remember looking in the local toy shop at all the World Cup Willie souvenirs. 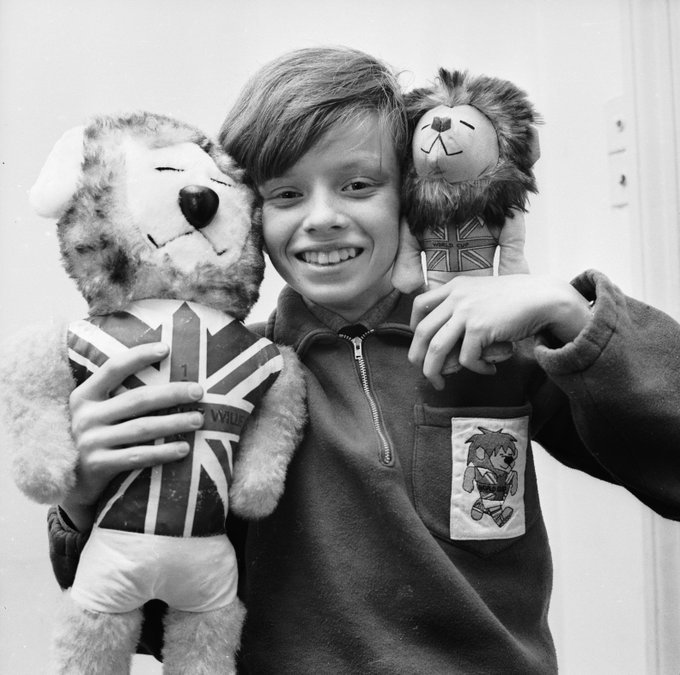 Some of the best World Cup articles can be found on the Sporting Life website. (Its free to watch and read.)
Today the SL reporter comments very favourably on the role played by the Man City defender Stones in the England defence.
I mention this in response to the view 'its not all about McGuire' (see above) (Agreed, its not)

He goes on to give Harry McGuire a bit of a write-up in terms of his partnership with Stones. (They are good at defending corners it has to be said.)

I would be worried about England's left back, Luke Shaw:
I take an interest in him because I like to watch Man U, so Ive been keeping an eye on his form. He has had a dip, but in recent weeks appears back to his best, playing a part in his club's resurgence under new management. But he is still prone to the odd lapse of concentration and awareness and occasionally allows the opposing forward too much space. He can get blindsided. If he has a marauding role going forward on the left, he could leave his flank open. Fortunately Mbappe plays on the other wing but France have other talented players up front who could exploit my idea of another weakness besides McGuire.

Of course England have their supporters and they are wellfound in the betting market, but when it comes to assessing sporting future outcomes objectively its best to leave patriotism behind.

Jack. (or should that be 'Jacques'?)
Reactions: antonio66, garn63 and Bazzer
D

One things for sure, I wont be having a bet on the outcome.

Could there be a repeat of the 1966 semi-final maybe?

While I do see the weakness in England in defence in my view echoing Jacks view that Shaw is a problem waiting to happen and in my view at this World Cup he has not been that effective going forward either I would replace him but I know that Southgate will not . France are also quite weak in defence and can be got at as shown in previous games . I would also dare to suggest that if allowed to play with freedom the England attack is a level well above what the French have faced as yet and if they get the chances they have shown to be clinical enough to finish what they create .

As in most games mid field is were things will be decided getting control of this area and the ball will shape the result . If France try very high and fast closing down England have to be quick and change (not all the time mix it ) to long ball passes over the press and then the attacking players need to hold the ball and attack the back four with speed and support . This is what changed the game against Senegal but it took us far too long to work it out . France may well have better players at dealing with one on one defending but I feel that our attack line including the attacking mid field are superior and is given their head could cause problems . Then it is down to being clinical .

Patrice Evra writes at length about England v. France on the betfair website this morning:

1. England, he says, have become more of a TEAM under Southgate (who is doing a good job); whereas in the past England players wouldn't mix with players from opposing premiership teams, now they work as one unit.

2. Dembele and Mbappe are threats to England, and if Mbappe meets resistance from Kyle Walker he will move inside and try his luck against Stones and McGuire, who will not be able to handle him; (the best way to beat Mbappe is to harass and foul him - this he doesnt like.)

3. A key player for France is Griezman, and for England, Jude Bellingham. Bellingham, continues Evra, is potentially the best midfield player England has had; Scholes, Lampard and Gerard have achieved more but JB could improve past them; 'he is great to watch', says Patrice; also Bellingham could play for any team, unlike other English Premiership players who struggled abroad.

4. Either side can win, says Evra, but predicts a 2 - 1 scoreline, the verdict going France's way. He adds that he doesnt fancy France if it comes down to pens, but it wont, he claims - France to score first and have it wrapped up in 90 minutes.

5. Going through to the final?
Evra fancies Portugal and Brazil to make it to the final game.

I agree about Stones, with Maguire, they have defended well, although against weaker teams. Shaw has been very disappointing for me, has he made a forward pass? Don't know if this is down to managerial instructions, but neither of the 'wing backs' have been getting past the half way line very often, playing with two holding midfielders this seems strange. On the plus side England are now through to the quarter finals when the real competition starts, and even though France are favourites I think England are in with a real chance to win.
I'm looking forward to all the games today and tomorrow, may the best teams win.

Well that's the first part of Patrice Evra's predictions wrong. Let's hope it's not the last.

As I said a couple of days ago I wasn't totally taken with Brazil and thought that South Korea played right into their hands and that Croatia wouldn't. Anyone who still takes Croatia lightly is a mug. With a population of 4M (similar to Wales ) they produce an inordinate number of technically gifted players.
A

Brazil were the better team over the 120 mins, but you've go to put those penalties away, respect to Croatia.
D

I half expected Croatia to do a nice Croatian jig in front of the Brazilian bench.
Reactions: Tony_J
A

Is 16 yellow cards a record?

Could be Messi's year.

If he gets yesterdays ref again it will be. It seemed like you only had to look at him and it was a foul. He even did a deliberate handball that didn't lead to a yellow card.
Reactions: deggie and Andy Stephenson

So far this turning in to fine weekend Brazil out and now Portugal are close to the landing strip as well . So no world cup for either Ronaldo or Neymar which given their respective arrogance can only be a good thing .
Reactions: DIB and deggie
A

Morocco deserved the win more than Portugal did.

Another "world class star" has an early bath!

Bathing in his own tears ..
You must log in or register to reply here.

It's a Sports TV Sunday in the USA