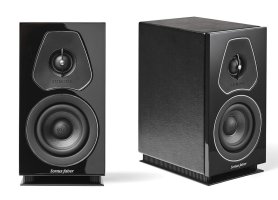 What wonderfully dinky little speakers. Love the look and the sound, but can they defeat the devil that is physics?

These made in Italy speakers come nicely packed with a layer of thin foam between the face and the speaker grill. These attach magnetically, and arrangement that I always like. Apart from the speaker face the box is covered in leather. The face comes in a number of finishes, mine were finished in gloss black with the drivers bordered by some silver threading. The centre of the mid/bass driver has a nicely discrete ‘sf’ on the dust cap. 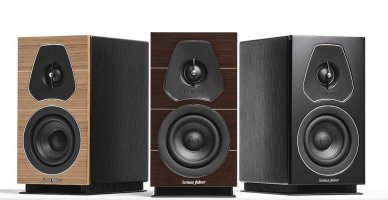 ​
The Sonus faber Lumina 1 specifications can be found HERE.

The speaker is a two-way ported design with a claimed frequency response of 65 Hz to 24 kHz. The nominal impedance is 4 ohm with a reported sensitivity of 84 dB, perhaps not the easiest speaker to drive, I found no issues with either my Naim NAP140 or NAP300DR.

The tracks were selected to allow:

This playlist is a subset of the music I listened to: 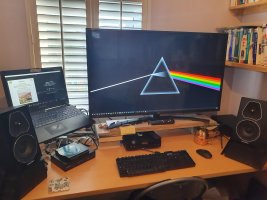 ​
As you can see, I set my nearfield speakers on acoustic foam angled to tip up towards my ears approximately eighteen inches from each lug hole.

The Chord Hugo TT is the pre-amp as well as the DAC.

The diminutive Lumina 1’s were making music straight out of the box, but I would say the quality of the bass improved over the first week as the drive units loosened up. At the same time the upper frequencies, which were excellent, fractionally sweetened.

When I reviewed the Lumina IIIs I was especially taken with the effect of the Sonus faber tweeter. This is the same damped apex dome that are used in the Sonetto series, and an effective unit it proves.

Having replaced my usual Sound Artist LS3/5a with the Sonus fabers I was immediately impressed by the wide effect area created around me head, no specific area that was required for me to get effective imaging. This is something that pleased me in moving from my Wharfedale Diamonds to the Sound Artists, that the Sonus faber Lumina I upped the anti again is noteworthy.

The immediate impression was one of increased detail, but not in distractingly so, it was there to be listened into if that is what you want. The other area that landed was mid-range drums which had an infectious dynamic punch that drove pop and rock forward.

Infectious is a word that I found applied to these speakers in this system. I found myself listening to my near field system with renewed enthusiasm. Playing music opened up a level of unforced detail and musical insight that I thoroughly enjoyed. Where there any areas in which my faux-LS3/5a where able to hold their own or outperform the Sonus fabers?

Before answering the question posed above I will point you in the direction of this web based Sound Artist review where they were compared with ‘proper’ LS3/5s speakers. The summation is that they use cheaper parts, different materials but so retain the LS3/5a imprimatur, good VFM but at the low end of the feeding chain. So, not a bad reference for the slightly more expensive Sonus faber Lumina I.

The Sound Artists are undoubtedly warmer and less detailed. Frequently this might be a good differentiator, but not here. The Sonus faber Lumina 1 are detailed without being in any way edgy. The feel of the Sound Artist LS3/5a are therefore of being somewhat heavy and less fleet of foot and lacking extension. Vocals sound somewhat recessed and lacking expression. While the Sound Artists feel more mid bound their bass presentation gives an increased feel of scale with ‘big’ productions, such as Massive Attack’s Angel; this despite being sealed boxes against the Sonus faber Lumina 1 ported design. This scale is gained at the expense of even more detail. In reality this feeling of weight is induced by compressed nature of the musical presentation, but is still attractive.

On to some listening notes:

I was immediately aware of the increased detail. This included the left channel cymbal taps that had hitherto passed me by. Excellent sound staging and vocal verisimilitude. When the rhythmic underpinning joins the fray at about two minutes the whole track comes together with a forward impetus. This is then kicked into higher gear at three and a half minutes. The kick drum has some nice dynamism which pins your interest.

This is a heavily produced track that has many layers. The Lumina 1 do a nice job of allowing you to listen into the track without forcing your interest. At the start is a percussive block. The dynamic reproduction of this drew my attention, but without any negative effects. This is what I find with dirty power, increased detail and dynamics but with sibilant overtones. NO such issues here.

Killing Me Softly with his Song, Killing me Softly, Roberta Flack, QoBuz, CD

Beautifully rendered voice. Excellent production values are in full presence. The various high frequency percussive instruments are presented across the sound field with nice metallic rings. These hang in the air and fade. The echoed backing singers and musicians support Flack ably.

Nice touch at about four minutes twenty seconds when you here one of the backing singers count them in; as a choral singer this is something with which I can strongly empathise.

Deliberately chosen as this whole recording is immense in its presentation. The track is full of small percussive elements which shine via the Sonus fabers. As the larger dynamic strands develop the scale is presented well, and most importantly the port at no point intrudes masking the mid-band. Ultimately the full scale defeats the small enclosure. But what is presented is musically exciting and enveloping. The added detail of a nearfield system in some senses makes up for the diminution of scale.

Wonderfully engaging and detailed music the ultimately is somewhat constrained in scale, unsurprisingly.

I am mentioning this as on my initial listening I found the lyrics could get somewhat sharp and the bass was a bit underwhelming. As the speaker shook out the former effect reduced and the bass size and impact grew.

A friend popped round for a music evening last week and asked for this. I had not previously heard it and quickly decided it was music I would rather sing than listen to; an opinion I am starting to moderate. At one minute and nineteen minutes there is a kettle drum punctuation that made my friend jump. The impact is lessoned via the Sonus faber Lumina 1, but while the scale is somewhat constrained the detailing and vocal presentation is very enjoyable. 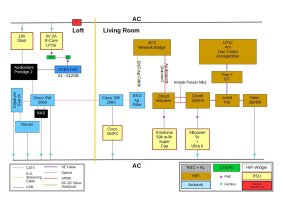 ​
I set the Sonus faber Lumina 1 on a pair of weighted stands. To get the best from these speakers you really do want to get the tweeter at ear height. I had them about two feet from any boundary wall toed in towards me. They were approximately six feet apart and eight feet from my listening position. The word when installed is diminutive, the sound is very definitely NOT.

The specs on the speakers are a nominal 4-ohm impedance with an efficiency of 84 dB. These are therefore not designed to work with low power amps. However, I had no issues driving them, I just had to turn up the wick another few clicks.

Before installing the speakers, I was concerned that the speakers would fail to pressurise my fourteen by twelve foot listen room. In the event they did with surprising aplomb. In fact, they made an excellent stab at rendering Massive Attack’s Angel. I am not saying that they defeat physics. But as controlled as the port was in my nearfield system when used in a larger context it transmitted the larger scale dynamics in a way I found satisfying.

Having heard the background singer’s count in on Roberta Flack’s Killing Me Softly I lined it up in my main system. No, the subtly of the softly breathed count was absorbed within the music; I could claim to be surprised. But, this macro picture of the track was satisfying.

I won’t repeat my listening notes, suffice it to say that the stars were once again the tweeter and the well-engineered port. That is not to say the mid/bass(ish) driver was letting down the show. For instance, I played the Chris Botti track ‘When I fall in love’. Similarly, to the near field experience the positioning, dynamics and detail in the drumming was excellently reproduced.

The tweeter allows through a level of detail that is delightful. This in conjunction with the speakers form factor allows for some very good 3-D aural painting.

The port is very well designed and allows for easy speaker positioning, as is testified by its ability to project a large sound field in a smaller room.

Ultimately the Sonus faber Lumina 1 does not defeat the physical limitations of its cabinet, but its excellent engineering makes the most of its self-imposed limitations in size, materials and technologies.

In comparing the small Sonus fabers to my usual Sound Artist faux LS3/5a I would happily spend the extra three hundred pounds to obtain its extra facets. This is an excellent pair of small speakers and if they are within and near your budget, I heartily recommend a listen.
Reactions: FizzyPickles and Roo
Click to expand...
M
Written by