Following the discussions regarding my WM-D6 which I brought to the WAM Show, several Wammers have suggested that we have a thread dedicated to Sony Professional Walkmans.

Generally the term “Professional Walkman” covers the WM-D6 and WM-D6C models, but the WM-D3 and the playback only WM-DC2 were also offered by Sony as “Professional” models.

While I would like this thread to celebrate the amazing qualities of these vintage machines, I feel that I should start by repeating the warning I wrote in the “WAM show, Stoke, 2022 photos” thread, in the hope that it may save somebody from an expensive repair or an unusable walkman.

The warning concerns the problems with the Sony CX20084 motor driver chip which is used in the D6C and also in the D3 and DC2 (as well as the DD100 “Boodo Khan” and some other DD series walkmans).

Do not plug any of these walkmans into a non-Sony plug-top DC power supply, even if the stated output voltage is correct for the walkman, or you will probably blow the CX20084 motor drive chip, resulting in the motor running very fast or not at all.

This can happen for one of three reasons.

Firstly, the DC input sockets on the D6, D6C, D3 and DC2 (along with a lot of other Sony equipment from that era) are wired centre pin negative. If you plug in a supply which is wired centre positive (as most sold now are) it will blow the CX20084 chip on the D6C, D3 and DC2 models. It will also damage the internal DC-DC convertor in all of the Professional models.

Thirdly, a power supply delivering over 6V (including a set of 4 fresh alkaline batteries) can damage a CX20084. Even if you have an old Sony 6V supply, check the output voltage before plugging it into a D6. For a D3 or DC2, the supply voltage should be no more than 3V.

To make matters worse, in all cases the CX20084 chip is connected directly to the incoming power supply so you don’t even have to press “play” or any other control button to destroy the chip. You will destroy it as soon as you plug the power supply into the walkman.

Replacement CX20084 chips are now becoming very difficult to obtain and very expensive. To make matters worse, there are some unscrupulous sellers selling fake CX20084 chips on various outlets including eBay and AliExpress.

I recommend that you run these walkmans on batteries only, preferably the rechargeable Eneloop Pro types.
Remember, if you see a power supply being sold as "Suitable for the WM-D6C", it probably isn't!

Please see my post on Stereo2Go regarding the problems with the CX20084 chip:

Sony WM-D6C and DD Series Walkmans - WARNING! Read this before plugging in any DC adaptor!
Reactions: TheFlash, akamatsu, robin and 3 others

Thanks so much for posting this - I still have the original power supply for my WM-D6C, but as the dummy earth pin is broken, I had been thinking of getting a replacement - I had absolutely no idea that it was a linear power supply (I bought my Walkman in 1993 if that makes any difference?) - am I right assuming that I could just use a normal linear power supply (ie a Teradak) set to the correct voltage? Do you happen to know the required current? Thanks in advance MH

I have a WM-D6C. It’s a truly wonderful machine. I have the original box, headphones, case and Sony Power adapter. Several years ago I got back into cassette and was really surprised at how good a good deck could sound. I was fortunate to get to know Alex Nikitin who despite previously being Creeks chief amplifier designer was totally immersed in the world of cassettes. I first bought from him a custom Aiwa XK-S7000. He and his wife used the WM-D6Cs daily and so I managed to find a mint one. He suggested that I bring it round to compare to his. His sounded better. Alex changed the Op amp. It was really simple to do and made a big difference. But I don’t know the model of the op amp that he used.

At the same time as owning the WM-D6C I owned an Astel and Kearn Kann. I recorded a CD to the Aiwa and played it back on the Sony comparing it to the same CD ripped and played back on the Kann. Wow the cassette had a much bigger 3D sound. And so the Kann was sold after just a few months. I used to have a 35 minute commute into London. I could listen to one album on the way in and another on the way back so only ever needed one tape with me. Cassette can sound very good. You just need to buy the right one.
Reactions: TheFlash

@MotherSky - A regulated linear supply should be OK. Make sure that the output voltage is no more than 6V. It should be capable of delivering up to 600mA.

@DomT - The op-amp Alex has used is probably the NE5532. He recommended this modification on Tapeheads. I have carried out this modification and it does give a more detailed and expansive sound. The original line amplifier, the NJM4558M seems to constrain the sound somewhat, when compared to the WM-D6, in which the output signal is taken directly from the Dolby chip, with no line amplifier.

I know what you mean about the 3D sound stage. This is particularly noticeable with high quality analogue mastered pre-recorded tapes. I discovered this back in 2013 when I had finished rebuilding my Revox B710. I bought a box of pre-recorded cassettes off eBay and started playing some of them. I came across one of the London Cast Recording of Evita. I had this recording on CD and had heard it many times before. I decided to put the Evita cassette in the Revox anyway and, straight away, I was hearing details which I had never heard in the CD recording. It was a completely different listening experience. And that point marked the end of my 30 year conviction that CDs were the best thing since sliced bread.
Reactions: DomT and MotherSky

Thanks for creating this @Deb64
Here's my two WM-D6Cs along with my ECM929 mic that I used to record a few gigs. The one on the left is my well used original from the mid 80s, I dropped this at one point and claimed on the insurance. The volume pot was damaged which I replace & it worked for many years after that before developing an issue. I then bought the unit on the right off eBay but as it turned out I was able to fix my original after all. From memory the eBay unit had an issue that I need to revisit sometime. I've got a euro power supply somewhere as well 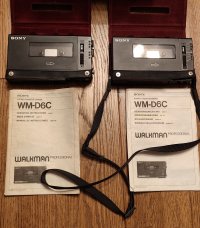 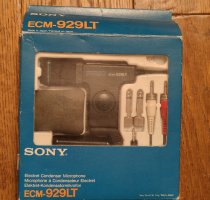 I have a recently serviced Sony WM D6C machine in really good condition and have owned a few since the late 1980's whilst a student. It was the thing to have especially when printing in the darkrooms, decent recordings on good tapes really helped pass the time.

Live recordings were often made with my Sony ECM 959 microphone and a Sennheiser stereo microphone and sounded rather good. I think the other machines I liked very much (still have 2) are the Sony TC D5 Pro 11 and the TC D5 M, excellent pro quality machines, larger than the WM D6C but very special IMHO.
Reactions: DomT, Deb64, TheFlash and 1 other person
F

Can anybody recommend somewhere to get a WM-D6C serviced/repaired ? I have a friend with one and it fast forwards and rewinds but does not play.

PM sent
You must log in or register to reply here.